2016 claimed many a luminary, from Prince to Muhammad Ali, Carrie Fisher to Kenny Baker. The English author, artist and art critic John Berger narrowly escaped that cursed year only to be snatched away with the arrival of the new year. He died too soon at the age of 90, but his critical mind continues to influence his successors in art history, art criticism and, yes, media literacy. 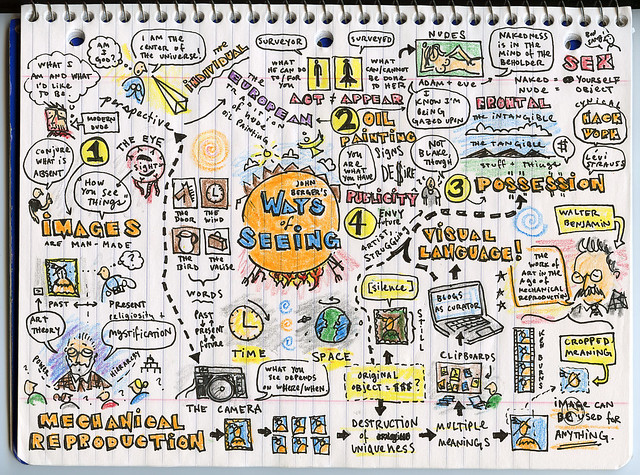 Mind map of “Ways of Seeing” by Austin Kleon

I first encountered John Berger’s “Ways of Seeing” as an assigned text for my Freshman year Intro to Art History course at Northwestern University. I didn’t know then that the book had been conceived as complement to a BBC documentary series of the same name directed by Mike Dibb—which you shouldn’t binge watch but view weekly as when it aired in 1972, allowing the ideas time to work on you between viewings. Through the book, Berger’s words didn’t just blow my mind, they ruptured my vision.

Berger taught me how to see critically. He taught me to consider not only the physical context of an artwork—its frame, its location in a museum, the adjacent works sharing the wall—but also the social, political and economic frames that shape how people experience an image. His ideas continue to inform our work at the LAMP as we show young people how to notice deeply and think critically.

Berger’s critique of gender representation in Western art applied directly to a recent “Breaking Ads” program at the Manhattan Early College School for Advertising (MECA). While exploring how advertisers target men and women differently with high school students, we traveled to the Instagram page for the fashion brand Michael Kors. There we found two adjacent images. One shows a reclining woman snapping a selfie amongst her recent purchase from the store. The other shows a serious man in motion, departing his private jet heading…somewhere important presumably. Here we see that—as Berger noted with respect to European painting—”the social presence of a woman is different in kind from that of a man.”

“A woman must continually watch herself. She is almost continually accompanied by her own image of herself. Whilst she is walking across a room or whilst she is weeping at the death of her father, she can scarcely avoid envisaging herself walking or weeping. From earliest childhood she has been taught and persuaded to survey herself continually. And so she comes to consider the surveyor and the surveyed within her as the two constituent yet always distinct elements of her identity as a woman. She has to survey everything she is and everything she does because how she appears to men, is of crucial importance for what is normally thought of as the success of her life. Her own sense of being in herself is supplanted by a sense of being appreciated as herself by another….

One might simplify this by saying: men act and women appear. Men look at women. Women watch themselves being looked at. This determines not only most relations between men and women but also the relation of women to themselves. The surveyor of woman in herself is male: the surveyed female. Thus she turns herself into an object—and most particularly an object of vision: a sight.”

Man in motion. Woman in a shopping bag.

At MECA we discussed with students how people use Instagram photos to construct a social identity: how we want to be seen by others. Brands use social media to construct a brand identity: how a brand wants to seen by consumers. In the process companies bombard viewers with images that perpetuate representations of women that are confining, limiting and harmful. Women may become objectified when rendered through the possessive male gaze. As mere objects of vision, the message reinforced is that they have no power, no agency, and no status except in relation to men. When we deconstruct advertising images and other visual media with young people, Berger’s potent ideas challenge us all to see in new ways.

In “Ways of Seeing,” Berger spoke not only of art but of advertising (publicity). So much of what he said contributes directly to LAMP’s mission of helping people critically comprehend and challenge media. 45 years later, his words remain clear and vital, revealing how advertising works and how it works on us.

“Publicity is about social relations, not objects, its promise is not of pleasure, but of happiness: happiness as judged from the outside by others. The happiness of being envied is glamour.”
“It proposes to each of us that we transform ourselves, or our lives, by buying something more. This more, it proposes, will make us in some way richer—even though we will be poorer by having spent our money. Publicity persuades us of such a transformation by showing us people who have apparently been transformed and are, as a result, enviable. The state of being envied is what constitutes glamour. And publicity is the process of manufacturing glamour.”
“The interminable present of meaningless working hours is balanced by the dreamt future in which imaginary activity replaces the passivity of the moment. In his or her day-dreams the passive worker becomes the active consumer. The working self envies the consuming self. No two dreams are the same. Some are instantaneous, others prolonged. The dream is personal to the dreamer. Publicity does not manufacture the dream. All that it does is to propose he are not yet enviable—yet could be.”
“The purpose of publicity is to make the spectator marginally dissatisfied with his present way of life.”
“All publicity works upon anxiety. The sum of everything is money, to get money is to overcome anxiety. Alternatively the anxiety on which publicity plays is the fear that having nothing you will be nothing.”

John Berger, we at the LAMP salute you. Bon voyage.

Missed our first #LAMPchat? Get caught up!

Missed our first #LAMPchat? Get caught up!